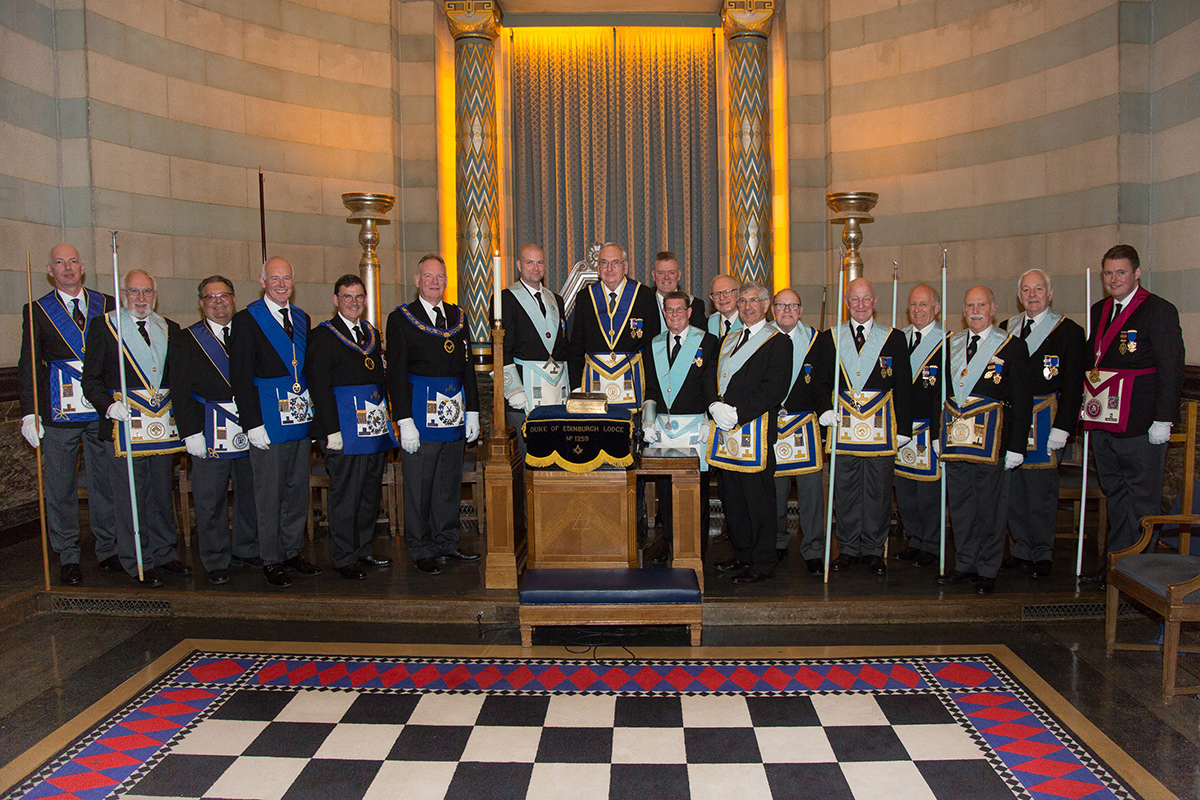 Lodge Officers with the official party
Duke of Edinburgh Lodge No. 1259 150th Anniversary

On Saturday 11th May 2019, the Duke of Edinburgh Lodge No. 1259 held a special meeting at Freemasons’ Hall, Great Queen Street, to mark its 150th Anniversary. The occasion was attended by 140 members and guests.

Such occasions are always a happy event but especially so for ‘the Dukes’ as just 20 years previously the Lodge was on the point of handing back its warrant. It then changed to a day-time Lodge which triggered its survival. It is now going from strength to strength.

Also, in attendance were a large number of other distinguished guests including the Masters, Secretaries and representatives of ‘the Dukes’ mother, sister and daughter Lodges and W Bro. Stephen Ayres, a past Secretary who had played a major part in helping to save the Lodge.

After the formal opening of the Lodge and the salute to the Guest of Honour, W Bro. David Baker, the Master, invited W Bro. Dennis Brown to occupy the Chair and to preside over the meeting and the Festive Board in recognition of his services to the Lodge over many years. The Presiding Master thanked the Master and formally welcomed all the distinguished visitors.

This was followed by an excellent talk by W Bros. John Grosse and John Fetterroll on the history of the Lodge and some of the changes which had taken place since the Centenary meeting in 1969, including its near extinction in the 1990s, and its rise from the ashes.

The Lodge’s revival was partly promoted by talks at meetings of such diverse topics as: British Library, construction of the Channel Tunnel, Prison Service, life of Mozart and, on one occasion after the Lodge was called off, a visit to the Marx Memorial Library in Clerkenwell Green. In the talk were remembered those who had contributed so much to the Lodge over the past 50 years, many of whom were present. Homage was also paid to those who had passed to the Grand Lodge above.

Following the talk, the Assistant Metropolitan Grand Master presented the Presiding Master with a certificate signed by the Metropolitan Grand Master commemorating this historic occasion. This was followed by a presentation to W Bro. Stephen Ayres who was for many years the General Manager of the Central London Masonic Centre at Clerkenwell and whose foresight and leadership led to the Lodge becoming the first daylight Lodge at the Old Sessions House, Clerkenwell and resulted in the turnaround in the Lodge’s fortunes.

Following a brief interval, the Brethren were given a most interesting and informative talk by W. Bro. Mike Neville, a retired senior detective from the Metropolitan Police Service, entitled “Jack the Ripper – Jack the Mason?”. Following the talk and to ensure that the Brethren had been paying attention, W Bro. Mike divided the Lodge into two halves and conducted a quiz which was eventually won by the Brethren in the South, but only on a tie-breaker!

The Presiding Master thanked W. Bro. Neville for an entertaining and interesting talk and presented a cheque for his charity, the Army Cadet Force.

After the meeting, 140 Brethren dined in the Grand Connaught Rooms in fine style. Each was given souvenirs of the occasion including a booklet detailing the Lodge’s history over the past 50 years, souvenir pens and pocket lights. The Charity Draw and auction raised a further £1,000 to add to the £1,000 already pledged to the RMBI.

In his response to the toast to the Master and Presiding Master, W. Bro. Brown paid tribute to all who had attended the meeting. He thanked Lodge members for being part of a great team. not only in their support for the Lodge in general, but also in ensuring the success of the 150th Celebrations.

He made special mention of the hard work done by W. Bro. Alan Ruel, Lodge Secretary.

W. Bro. Brown also referred to the fact that among those present were Brethren from at least ten other countries and from many religious backgrounds – proving, if ever proof were needed, that Freemasonry is truly universal. He took the opportunity to remind the newer members of the Craft that whenever they were among Freemasons, they would always be among friends. These comments were greeted with hearty applause.

Following the banquet, the Brethren were entertained by a professional singer with an engaging repertoire of songs from popular musicals.

All in all, an excellent and fitting celebration and tribute to a Lodge much loved by its members!